Member of the HUBER group

30.03.2021
Press Release: HUBER Technology, Inc. was selected as the equipment provider in the recent bid to design and supply the new grit treatment system for the Grand Rapids WWRF. 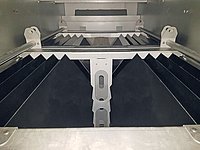 Separated grit in the GritWolf®

The GritWolf Advanced Grit Removal System will replace one of four existing “chain and bucket” grit systems, while preserving the existing concrete grit chamber. The GritWolf lamella packages are modular and can be configured to suit existing structures.

Since 2019, consulting design engineers at HRC and HUBER local representative Glen Hummel from HESCO have worked on incorporating the GritWolf into the design due to its uniquely small footprint.

The GritWolf system will be paired with a RoSF4 Grit Washer, a Gorman Rupp T-4 Grit Pump, as well as a complete control system, giving Grand Rapids a modern and automated grit system while providing the inherent savings of reusing the existing concrete structures.

“No other advanced grit system that can so readily reuse traditional grit chambers. We are confident that the HUBER GritWolf will exceed the performance requirements in Grand Rapids.,” says Simon Randle, the National Sales Director for HUBER. The system is scheduled to be installed by Davis Construction in January of 2022 with the requirement of completion of a successful performance test by May of 2022 by an independent provider.

Upon successful completion of the project and adherence to the performance guarantee, the other three grit chambers will also be retrofit with a GritWolf system, achieving Grand Rapids grit protection goals.

<- Back to: Huber Technology USA News